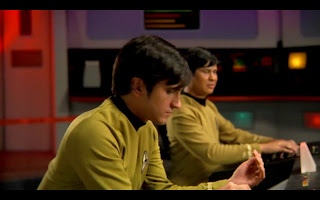 Jonathan Zungre is an up and coming individual, who is an actor for Star Trek Phase 2. I am honored to personally know him and that he agreed to do an interview for me.

1.What is it that you both do for your “day job", if you can talk about it

JZ: It talk about video games on the radio. I started a company called Video Game Winners and Losers (VideoGameWinnersAndLosers.com) where I review all the new video games on a bunch of different radio stations all over the country. It's a tough job, but someones got to...nah, I'm kidding, it's awesome.

2.What is your connection to Star Trek? and how has it affected your life?

JZ: I play Chekov on Star Trek New Voyages/ Phase II. It's the most fun I've had acting and something that people always think is cool when I tell them about it.

3.How did you first hear of Star Trek: New Voyages/Phase 2?

JZ: I heard of it through my first audition. I was like, "No way, acting in a Star Trek show? That is too cool." When it came to auditions, it really was the diamond in the rough. The "rough" being weeks and weeks of auditions for commercials, cruise ship musical theatre and self indulgent student films. I think I prepared harder for that audition than any.

4. "Enemy: Starfleet!" was your first go around as Chekov, how hard is it to be the character and do you think you have gotten better with each performance?
JZ: The accent can be tricky. I have to warm it up and keep speaking in it or I'll start to lose it. But Chekov is a fun character and especially in a lot of the scripts I've had the pleasure to work on, he's got some great character moments. I got to do a fight scene where I duke it out with a humongous Klingon. I love stuff like that.

5. What is your favourite memory of being on set or just hanging around with the crew?
JZ: A couple of the guys gave me a pantsing during a bridge scene during Enemy Starfleet. Thankfully my regulation uniform was tied pretty tight, so my pants didn't come all the way down. And we used to have bonfires every night, where we'd just sit and talk. Those were great. We eat breakfast in these little restaurants near the set. Driving an hour to see a movie with JT. Laughing till we started crying while playing Grand Theft Auto with Bobby during The Child shoot. Too many good memories to name.

6. In your own words, how would you describe both the atmosphere on set and the realization of a dream that many dream but few can say they have experienced
JZ: It's a blessing, it really is. It's something I'll always be grateful for. And the atmosphere is friendly...when we're not up at 3 am trying to finish a scene. When you're on set, it's a great marriage of professionalism and fun.

7. Is it really a "family" as some people have described it?

JZ: Yep. People are close. And they fight. Sounds like a family to me : )
8. Are there any other projects you are working on? Whether it is Star Trek or Something else.
JZ: Well, you can listen to my radio segment. It'll be on every weekday starting October 31st on the Video Game Winners and Losers Facebook page. Hit me up with "like" if you check it out: http://www.facebook.com/pages/Video-Game-Winners-and-Losers-Radio-Segment/204769882900010

JZ: Just want to send a thank you to James, Patty, Sarge, Rob and everybody else that has made Star Trek such an enjoyable and memorable experience for me.


Again a major Thanks go to Johnny for doing this, and keep your eyes out for Johnny's next adventure as Chekov in Phase 2, "The Child" written and directed by Jon Povill.


Until next time blog readers, keep reading, Trekking and Live Long and Prosper
Posted by Fez at 3:19 PM