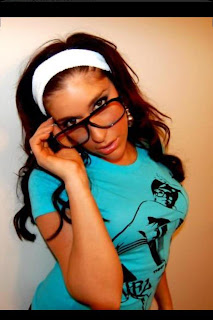 A surprise that same out of the June 2012 Star Trek shoot of "Bread and Savagery" was that I we got an another excellent addition to our Star Trek family: Faith Stanek. Below is my interview with her:
1.What is it that you both do for your “day job", if you can talk about it
Well I have been a hair & makeup artist for about 8 years. I love it & it comes in handy on photoshoots & film sets-like in shooting Phase 2! I helped make some of the cast even better looking than they already were!
2. How did you first hear of Star Trek: Phase 2?
From a friend who has worked on the production in the past Mr. Jeff Forsyth! He said they we're looking to cast someone that fit my description so I sent all my info, headshot, demo reel and clips to Patty & that's how I ended up in this episode! 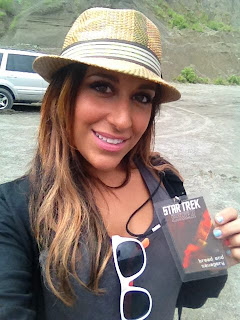 3. I understand that you were not a Star Trek fan before you came to shoot "Bread and Savagery", are you now or do you have an appreciation for it ?
I never really knew anything other than some guy had weird eyebrows & they are in space or something- The set was so cool the enterprise, the transporter (where I tried to nap) was just so cool I wanted so badly to take a picture in captains chair! On set I saw how passionate everyone was about it and all the memorabilia around the studio- it made me very interested in it all & I can't wait to figure out how everything turns out!
4. What was your role/job at this shoot? What was the audition/Orientation experience like?
Well when I walked in to the studio I was SO nervous there were so many people, I didn't know anyone really just emails back & forth with Patty for weeks. I was the "Slave Girl" to pro council played by the amazing Daren Dochterman & felt like it haha just kidding but I did jump from doing hair & makeup to in front of the camera..and I was thrilled with my wardrobe & pretty sure all the guys on set were too! Ha-ha 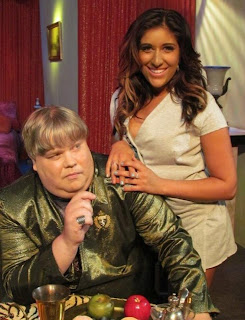 5. You came into the fold at an interesting time, with all the changes and fun stuff that was going on at the shoot... What was it like for you to be with the most passionate fan base in quite frankly the galaxy? and did you feel intimidated
I'm very outspoken, fearless, can talk to anyone about anything but I was walking into an already formed family as the "newbie" so I was extremely intimidated. Walking in everyone kinda just stopped & looked up- I was like a deer in headlights!! But everyone was so warm & welcoming, I immediately started chatting everyones ear off. I really bonded with Spock (Brandon Stacy) & Captain Kirk (Brian Gross) since we were hotel buddies across the hall from each other! As well as Brian Tubbs it felt like we had a lot of down time both waiting around on set for our time to film. Brian holloway was awesome I worked a little with him side by side helping with hair & makeup he's great and I learned a ton! Of course Fez too! I miss them all and can't wait for the next episode! I hear everyone raving about this being the best one yet!! 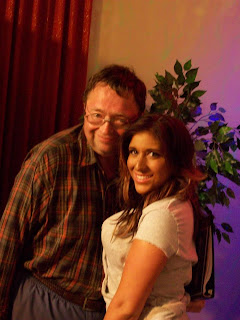 6. What is your favourite memory of being on set or just hanging around with the crew?
Honesty just being around everyone was so much fun! I was constantly entertained and had So many people to strike up a conversation with since I'm a chatter box! The day we filmed in the quarry was the best! Brian Tubbs performing his meteorology skills in between Filming his & the boys scene and at the last line being shot The skies opened up, chaos everywhere people grabbing everything & running..then Kirky running with with metal chair for cover...bahaha I have to say.. That made my day!
7. In your own words, how would you describe both the atmosphere on set and Is it really a "family" as some people have described it?
It truly is. Everyone is looking out for one another at all times, complimenting eachother, staying positive & bonding. You have all these great people sharing stories, advice, & food lol poor Tubbs I was always hungry and he always had food!! And you have big name actor like Brian Gross who was the sweetest guy I've met in this crazy Hollywood life! Everyone was wonderful- friends for life I feel so honored to have become a part of the family! 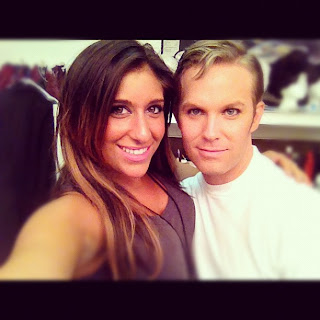 8. Are there any other projects you are working on? Whether it is Star Trek or Something else?
Currently I'm doing a lot of photoshoots & taking some big meetings. I begin filming a horror movie: "The Meat Puppet" which you can check out on IMDB, Facebook, Twitter and pretty much any horror blog, article, or website the press is going crazy! I begin shooting in a few weeks down in New Jersey where I am the supporting lead female in the movie which is great! I'm terrified of scary movies so I'm thinking I won't have to do much acting!! so I can't wait to see how it all turns out! You'll have to stay tuned!!

9. Any other thoughts you'd like to share with our readers? If you'd like to promote something you are in or are interested in here. Or maybe a message to the fans and readers of the blog.
I hope everyone enjoys this episode! The cast and crew worked so extremely hard on everything days and nights. It's going to be amazing and I hope to be a part of it for a long time!
Everyone can Stop by and "Like" my fanpage - Facebook.com/Faithstanek and website - Faithstanek.com where I will be putting updates on all my upcoming and current projects!!! Keep an eye out for new shoots and details on "The Meat Puppet" hope you all didn't start snoozing reading my rants :)
Peace out dolls! Thanks Jaime aka Fez for the interview!!
Love Star Treks Favorite Slave girl!
Faithy! 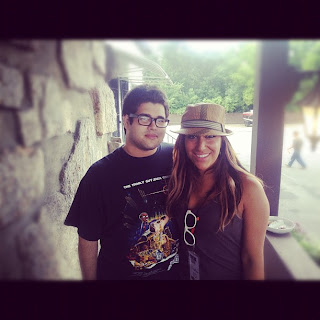