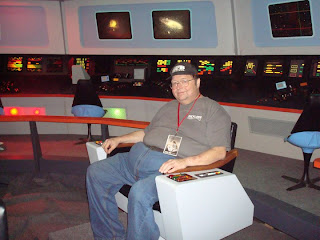 1.What is it that you both do for your “day job", if you can talk about it

I currently am a “day worker”, taking jobs and projects as they come to me. I did spend over 20 years in the theatre business, running movie theatres. During that time I ran drive-ins, art houses and multi-plexes ranging up to 16 screens. I also have been lucky enough to direct 4 feature-length motion pictures and have worked on a dozen other films over the years. For two years I was President of the Southern Ohio Filmmakers Association (SOFA). 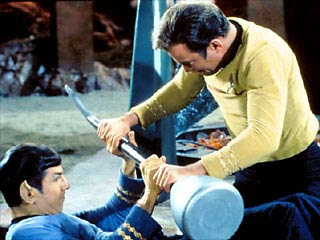 2. What is your earliest Star Trek memory?

I remember watching the Original Series when it first aired when I was a kid. I remember watching “Amok Time” when I was seven and getting scared when Kirk called McCoy “Bones”! I was sure I was seeing a horror show! What an idiot I was! I became addicted during the 70s when the show was in syndication.

I found it on my own on the internet. I first stumbled upon “Starship Exeter”, then I found “New Voyagers” and “Phase II”. I was immediately a fan. I couldn’t believe how perfect everything looked! The sets, the costumes, the props, everything! I was also impressed with the passion of the actors and had watched them grow in their roles with each episode. 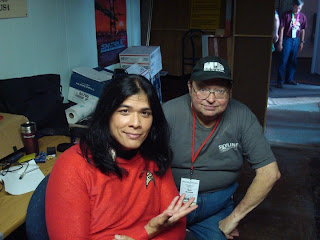 4. How has your appreciation for Star Trek changed now that you have been on the set for Phase 2?

I certainly gained even more respect for the work done by the original crew and directors in the 1960s! But I also gained a greater appreciation for what the Phase II crew had already accomplished. When I stepped on in that studio, I found a family of people that I shared a passion with. Every production I’ve ever been associated with has been a family of sorts, but Phase II is special in that we share much more than the desire to see the individual project completed. We share in the vision of Gene Roddenberry, and our own “Great Bird of the Galaxy”, James Cawley. 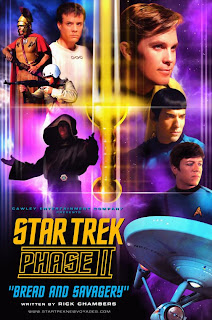 4. What was your role/job at this Production? And did you do more then that duty?

As the director of “Mind-Sifter” , “Bread and Savagery”, and “Going Boldly” my job was primarily to work with the actors and Director of Photography to tell the story in such a way that the editors could create the final product. On “Bread and Savagery”, I worked with the Producers in helping James recast Captain Kirk (Brian Gross) and Lt. Uhura (Jasmine Pierce). It was an honor to have a part in that, since they are such iconic characters.

5. You came into the fold at an interesting time, with all the changes and fun stuff that was going on at Retro Film Studios... What was it like for you to be with the most passionate fan base in quite frankly the galaxy? And did you feel intimidated

Of course I felt intimidated! When Jim Cawley called me and asked me to help him find an actor to step into the shoes (or boots) of Captain James T. Kirk, I knew I was in a very important place in fandom. I mean, other than Gene Roddenberry and J.J. Abrams, how many people have had a chance to cast the role of captain of the Enterprise? Plus, Uhura! I mean, how lucky am I?

6. What is your favorite memory of being on set or just hanging around with the crew?

Stepping onto the Bridge for the first time! In my mind, I’d been there thousands of times since I was 13. To finally be there was incredibly special. Meeting the cast was amazing, as I was a fan already. Other than that, getting to know the cast and crew was really special. They are such a kind, intelligent, talented group of people! They welcomed me immediately and made me feel like part of this amazing group. 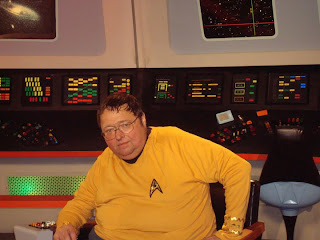 7. In your own words, how would you describe both the atmosphere on set and Is it really a "family" as some people have described it?

It is a family, absolutely/ As I’ve said on more than one occasion, Fez, I consider you the warped son I never had! I felt instantly at home on set. The people shared a passion with me that few people I’ve encountered have felt. In many ways we are siblings. James is like our father (though he is considerably younger than me) and Patty Wright is definitely a mother figure to the Phase II crew.

8. Are there any other projects you are working on? Whether it is Star Trek or Something else?

Well, I have been asked to direct the Spring / Summer 2013 Phase II shoot. It’s a script by “Bread and Savagery”’s Rick Chambers called “The Holiest Thing”. I’m also working with my producing partner Bill Dever on a series with Traci Lords and a couple of SyFy Channel projects with director Jim Wynorski. 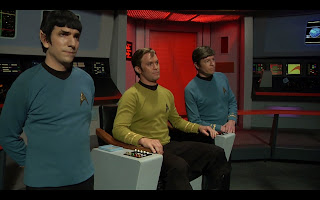 9. Will you direct an episode if I write one that is accepted?

Absolutely! I would be hurt if anyone else directed your script!

10. This is a first I will ask on this blog, Which Captain would you choose to command your ship…. Pike, Kirk or Picard

Kirk. Definitely Kirk. Picard was a fine character, but Kirk had the skills to work miracles when the odds were against him. Plus, he always got the girl.

11. Any other thoughts you'd like to share with our readers? If you'd like to promote something you are in or are interested in here. Or maybe a message to the fans and readers of the blog.

My only other thought would be to thank James and the whole Phase II family for giving me the chance to live my boyhood dream of being a part of Star Trek. I consider it a high point of my career. 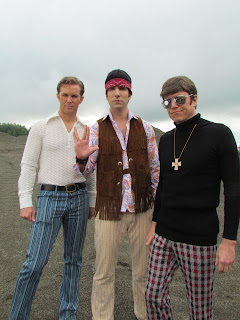 Alright everyone, thank you to Mark for donating his time to the blog but also to helping make more Star Trek for all of us.... and also a HUGE THANK YOU to all you readers out there... there is a bunch more to come. Until then Live Long and Prosper
Posted by Fez at 2:49 PM